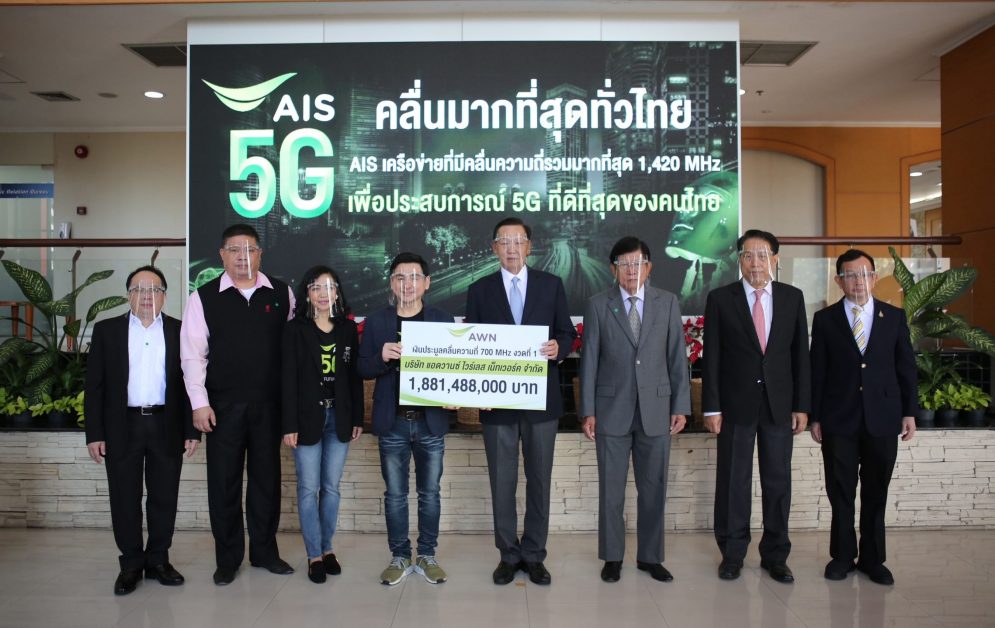 Somchai Lertsutiwong, CEO of Advanced Info Services plc. (AIS), in his capacity as an executive of Advanced Wireless Networks Co., Ltd. (AWN), the licensee of the 700 MHz frequency (723-733/778/788) MHz) with a total value of 15,584 million baht, made the first tranche of payment for the 700 MHz band of 1,881,488,000.00 baht (one billion, eight hundred and eighty-one million, four hundred and eighty-eight thousand baht only), including value added tax. The payment was accepted by General Sukit Khamasunthorn, Chairman of the National Broadcasting and Telecommunications Commission (NBTC), and is considered direct revenue for the country.

Somchai noted, "From our original vision to be the leader in deploying digital technology to upgrade the nation's infrastructure, AIS has been determined to bid for full blocks of 5G spectrum in every frequency band. We now have every necessary frequency from low frequencies, to middle frequencies to high frequencies, covering every conceivable format of use. These include 30 MHz (2x15 MHz) of bandwidth in the 700 MHz band, 100 MHz of bandwidth in the 2600 MHz band, and 1200 MHz of bandwidth in the 26 GHz band. Total bandwidth deployed for 5G service is 1330 MHz. Combined with our large amount of existing spectrum, AIS is confirmed as the industry number one in terms of frequencies providing 3G, 4G and 5G service, a total of 1420 MHz (not including frequencies from collaborations with business partners).

"At the present time, AIS 5G network is considered the strongest in the country. Besides being the only operator to have the most frequencies in each band, AIS is the only player in the industry to have a total bandwidth at a world's best-in-class level, this gives our AIS network the greatest capability to create and design solutions, and tailor adjustments for the needs of each industry with maximum efficiency. In the big picture, the AIS 5G network has a speed 24 times greater, a capacity 30 times greater, and latency 10 times less than previously. This means a huge upgrade in quality on current 4G services."

"The 5G technology standard known as 3GPP stipulates that the 700 MHz band is at its most efficient with a full bandwidth of 30 MHz (2x15 MHz). This is why we were determined to bid for another 10 MHz in the 700 MHz band (2x5 MHz), on top of our existing 20 MHz (2x10 MHz) to give a total of 30 MHz (2x15 MHz). Meanwhile, the 2600 MHz band requires 100 MHz of bandwidth to function at full efficiency, and the 26 GHz band requires 400 MHz per one block to provide an efficient 5G service, particularly in supporting digital solutions for the industrial sector going into the future. It is apparent that our total bandwidth in each frequency band of 5G technology is at the standard levels required to provide service."

Somchai reiterated that, "Because we have always been aware that radio frequency is a valuable public resource, AIS has always proceeded with rapid network development after bidding for each frequency band, to bring its benefits to the public and every sector. As a result, NBTC has now certified that AIS has been able to expand its networks in the 1800 MHz and 900 MHz bands in excess of the NBTC's requirements. For instance, the 1800 MHz band had to grow its network to cover 40% of the population within the first 4 years, whereas AIS has managed to expand it to 88.47%. Similarly, the 900 MHz band had to cover 50% of the people in 4 years, of which AIS achieved 93.59%. The team will continue to deploy each 5G band, each of which has different attributes, to bring immediate benefits. This is as envisaged by the government, who have targeted Thailand to become a Digital Intelligent Nation."