The rating is based on SCGP's relationship with its parent, The Siam Cement Public Company Limited (SCC, A+(tha)/Stable), under Fitch's Parent and Subsidiary Linkage Rating Criteria.

We assess SCC, which owns 72% of SCGP, to have 'Weak' legal incentive, and 'Medium' strategic and operational incentives to provide support to the subsidiary, which could result in up to two notches of rating uplift from SCGP's Standalone Credit Profile (SCP) of 'a(tha)'. However, SCGP's SCP is only one notch below the parent's consolidated profile, which leads to the equalisation of its rating with the consolidated profile of its parent, in accordance with Fitch's criteria.

KEY RATING DRIVERS
'Medium' Strategic Support Incentive: SCC's strategic incentive to support SCGP is driven by the subsidiary's roughly 30% contribution to the parent's consolidated EBITDA as one of the group's three core business segments. SCGP also provides diversification benefits to its parent, whose other core businesses are the more volatile petrochemical, and cement and building-material segments.

'Medium' Operational Incentive: Fitch's assessment of the operational incentive considers the 'High' management and brand overlap between SCC and SCGP, and 'Weak' operational synergies. SCGP's strategic and management decisions are integrated with SCC's, with full branding of the subsidiaries' products with the parent's SCG brand. We believe they have 'Weak' operational synergies as SCC and SCGP operate across independent value chains, which means the avoidance costs of SCGP's operations to the parent are immaterial.

Strong EBITDA Growth: Fitch estimates SCGP's EBITDA rose nearly 20% in 2021 and will increase 7% in 2022, from THB16 billion in 2020, supported by capacity expansion and several business acquisitions since 2020. We project SCGP's revenue to have risen to above THB120 billion by end-2021 and will increase to above THB140 billion by 2022, from THB92 billion in 2020. However, the ramping up of new capacity under its packaging paper division and increasing raw-material cost could moderate its EBITDA margin in 2022.

Solid Financial Profile: SCGP's funds from operations (FFO) net leverage is likely to increase to a modest 1.5x-2.0x by 2021-2022 (2020: 0.7x), driven by high capex and investments of around THB20 billion a year. The company plans to use part of the IPO proceeds of THB40 billion in 2020 for opportunistic acquisitions to pursue its growth strategy over the next few years. The key strategic focus is to expand its downstream packaging business in ASEAN, and extend its products and services to fibre-based and polymer packaging solutions.

Leading ASEAN Paper-Packaging Producer: SCGP's 'a(tha)' SCP reflects its leadership as the largest packaging-paper and corrugated-container producer in ASEAN. Its total fibre-based packaging capacity, which consists of upstream packaging paper and downstream packaging, will increase to 6.0 million tonnes per annum (mtpa) in 2022 and 6.3 mtpa in 2024 from around 5.7 mtpa in 2021, mainly from greenfield expansion in the Philippines and northern Vietnam. The capacity of its food-grade and polymer packaging has increased materially from a low base following the acquisitions since 2020.

Defensive Cash Flows: Around 70% of SCGP's packaging revenue is from consumer-linked end-markets, such as food and beverage, fast-moving consumer goods and e-commerce, which have defensive demand across economic cycles or are in a fast growth stage. SCGP's business is also supported by its vertical integration into containerboard, providing some margin protection against raw-material cost increases. We expect SCGP to improve its capacity and product diversity over the medium term, which would boost its demand from customers.

CP ALL, which runs the largest convenience-store chain in Thailand, has a better business risk profile than SCGP. CP ALL's cash flows are more defensive than SCGP's and it has a stronger competitive position, although SCGP has better geographical diversification. However, CP ALL's rating is constrained by its high leverage. There are risks to CP ALL's deleveraging trajectory, which are reflected in its Negative Outlook.

Makro is Thailand's leading operator in the modern food-wholesale market, mainly selling to traditional retailers, distributors as well as hotels and restaurants. We believe SCGP has a stronger business profile than Makro, particularly due to greater diversification of end-users and geographies. Makro faces lower competition domestically but it is exposed to higher customer and geographical concentration. However, SCGP has higher leverage than Makro, resulting in their similar SCPs.

SCCC is the second-largest cement producer in Thailand, but its cash flow is more susceptible to economic downturns compared with that of SCGP because of exposure to construction and real estate end-markets. SCGP is also more diversified geographically and across end-markets, which, together with more defensive demand from its end-customers, support higher leverage than SCCC for the same rating.

Factors that may individually or collectively, lead to positive rating action/upgrade:

Factors that may lead to negative action on SCGP's SCP include:

For SCC's ratings, the following sensitivities were outlined by Fitch in a rating action commentary published 24 January 2022:

LIQUIDITY AND DEBT STRUCTURE
Sufficient Liquidity: SCGP had THB27 billion in debt maturing within the next 12 months as of end-September 2021, including working-capital facilities from banks of around THB25 billion and current maturities of term loans of around THB2 billion. Its liquidity is supported by cash on hand of about THB19 billion as of end-September 2021, cash flow from operations of about THB13 billion a year and strong refinancing ability through the local debt-capital market and bank funding.

ISSUER PROFILE
SCGP is the key packaging arm of SCC, one of Thailand's largest industrial conglomerates. The company, which is listed on the Stock Exchange of Thailand, is a leading producer of paper-based packaging in ASEAN.

PUBLIC RATINGS WITH CREDIT LINKAGE TO OTHER RATINGS
SCGP's rating is linked to SCC's rating. 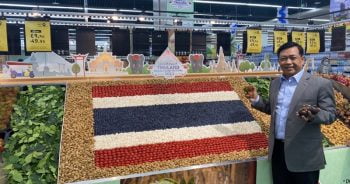