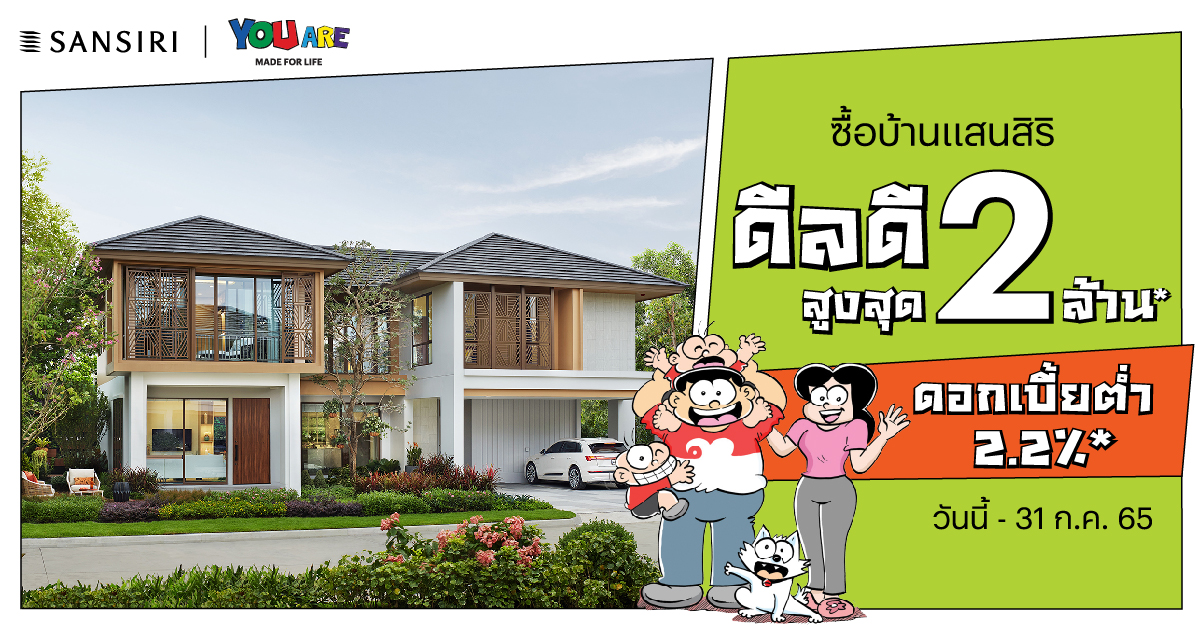 "Sansiri Public Company Limited", Thailand's leader in real estate development, has partnered with "Kai Hua Ror" which is a famous cartoon character brand recognised as Thailand's No.1 laugh inducer, to launch "Baan Nee HaHaHa " campaign to build on the 2021 successes. The strategy is to use laughter as a tool to endear people of every generation, and to stimulate the promotion and unheard-of special offers that is expected to shake the real estate business as Sansiri's CEO, Srettha Thavisin, initiates the hilarity and to further the mission to help Thais to own home more easily and to be able to laugh louder - from today until 31st July 2022.

Chaleerat Torcharas, Vice President of Corporate Marketing Department, Sansiri Public Company Limited, revealed, "Sansiri is advancing its 'Partnership Game' strategy following last year's successes when we partnered with 'Bar B Q Plaza' that became the talk of the town and pushing sales beyond the target to the tune of 7 billion baht. Therefore, this year Sansiri is sealing the partnership across the industry with 'Kai Hua Ror', Thailand's famous cartoon character brand to elevate the 'Baan Nee HaHaHa' campaign to penetrate the real-demand customer market in the 'affordable' segment. This is in sync with the new launch strategy of Sansiri this year at more than 50-percent in ratio, such as at Siri Place, Condo Me, THE MUVE, etc., through Kai Hua Ror characters that make it easier for people to access the brand and understand Sansiri's strong points.At the same time, this campaign reinforces the leadership position in the real estate market that never ceases to move forward and constantly creating new trend in the real estate market through creative marketing campaigns. More importantly, this is the first time that the cartoon caricature of CEO Srettha Thavisin will form a part of marketing communication in this campaign.

As for the marketing direction strategy in the second quarter, "Baan Nee HaHaHa" campaign is expected to create the experience of happiness and laughter for Thais as never happened before, through the well-known 'Kai Hua Ror' cartoon characters, namely, Noo-Hin, Pang Pond and Editor Vithit" narrating the search for homes that fulfill the end-users' needs as representatives of people who long to own homes. These characters tap into customers' insight relative to design, function and services that have become Sansiri's strong suit compared to competitors. Also, there are various CSR projects that Sansiri has continuously provided for the society since last few years. Crucially, the campaign is ready to further increase the level of happiness for all Thais to be able to laugh even louder with extra-ordinary "Aromdee Promotion" that will put all Thais in even happier mood with some of the best and ultra-exclusive offers that cannot be found anywhere else in the business. We aim to reach the campaign's sales target of more than 8.2 billion baht."

Pimpicha Utsahajit, Executive Director of Banlue Group, said, "Sansiri is the only real estate brand that is brave enough to venture into new and unconventional forms of marketing that can always generate keen interest among the Thai people. Kai Hua Ror is proud and honoured that Sansiri recognise the potential of Thai cartoon characters. This is the first time that 'Kai Hua Ror' is teaming up with Thailand's leading real estate brand. The partnership with Sansiri is a great opportunity to together bring happiness to Thai people all over the country through laughter and to inspire them to move forward. Therefore, this is a great partnership that 'Kai Hua Ror' is very proud of, with all cartoon characters in the 'Kai Hua Ror' team in their roles as end-users rather than simply as presenters. These characters include Noo-Hin, Editor Vithit, Pang Pond, as well as other characters familiar to most Thais, such as the Nang Yak (female ogre), The Parak (God), the robber in the alley, etc., together with comic gags and Kai Hua Ror's funny characteristics in various dimensions to tell the stories behind Sansiri's brand through the various forms of creative content and on several platforms disseminated through Sansiri and Kai Hua Ror communication channels."

"Baan Nee HaHaHa" campaign has been created in many media forms and on several platforms, including video clips, tabloid leaflets, and activities with Sansiri residents, as well as to utilise the cartoons and comical gags that have become unique identity of Kai Hua Ror blending in with property scenes to tell the story of the Sansiri brand. In addition, there will also be the creation of viral social media trend through story telling with various cartoon characters brought to life in the real world such as Troop, a cartoon gang spreading out in the city to give away tabloid leaflets at intersections, Installation Arts at various Sansiri projects, including single houses, condominiums and townhomes, DIY activities to redesign old T-shirts with Kai Hua Ror stickers, together with inviting people to follow and participate in the campaign with Facebook posts and hashtags #แสนสิริXขายหัวเราะ #แสนสิริบ้านนี้ฮะฮะฮ่า #โปรอารมณ์ดี and #YOUAreMadeForLife.

Be prepared for "Aromdee Promotion" that will put Thais throughout the country in a very, very good mood, with lowest interest rate of 2.2 percent from the bank for three years, or a down payment of only 1,000 baht/month for each million baht in price, and loads of great deals at all 66 Sansiri projects, beginning from 1.39 million baht : Single house - Good Deal at maximum 2 million baht, Condominium - Immediately receive 10-baht weight gold and Townhome - 300,000 baht cash back, and 110 percent loan*. The promotion starts today until 31st July 2022:

"Sansiri is confident that the cooperation with Kai Hua Ror will help push company's sales total to the 35 billion baht as target in this year while increasing the coverage of the customer base to better reach the customer base in every generation through Kai Hua Ror's customers which is considered to be a new dimension in getting closer to the customer groups in the real estate sector," Chaleerat concluded. 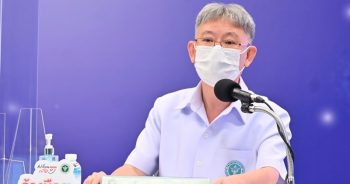