TRIS Rating expects demand for residential properties in 2021 to grow slightly from last year. Key positive factors are the low interest rate and the rollout of the Coronavirus Disease (COVID-19) vaccines. However, the rising proportion of household debt to gross domestic product (GDP) and the expansion of non-performing loans (NPLs) continue to be the primary factors weighing down the industry.

Demand for residential properties, especially condominiums, was hit hard by the implementation of new loan-to-value rules in 2019 and the outbreak of the COVID-19 in early 2020. Net presales (net of cancellation and bank rejection) of condominiums of 23 rated developers dropped sharply from a peak of THB200 billion in 2018 to around THB122 billion in 2019 and THB67 billion in 2020. For 2021, the second wave of COVID-19 outbreak is expected to hinder the recovery of the condominium segment as investors and foreign buyers may not return until the end of the year.

However, based on the strong presales during 2017-2018, housing unit transfers did not change much from the previous year. Housing unit transfers in 2020 increased almost 10% y-o-y to THB317 billion, as several developers used aggressive pricing strategies to accelerate sales and transfers of their completed condominium units. As a consequence, overall profit margins are expected to drop by 3%-4% in 2020. However, debt levels of rated developers did not change much despite the postponement of the new launches of several projects. The average debt to earnings before interest, taxes, deprecition and amortization (EBITDA) ratio is therefore expected to jump to 7-8 times in 2020, from the levels of around 4-5 times seen in the past.

Looking forward, we expect demand to gradually recover. Price competition may become less intense. Operating performance of rated developers is expected to improve gradually and return to the 2019 level by the end of 2022. However, the operating performance of rated developers could vary depending on their ability to adjust product mixes to meet the needs of target customers. Developers with diversified portfolios and strong positions in both the condominium and landed property segments are expected to outperform peers during this period.

At the end of January 2021, TRIS Rating had rated 23 developers, comprising six issuers in the ?A? category, 11 issuers in the ?BBB? category, and six issuers in the ?BB? category. Last year, we downgraded five companies, assigned ?negative? outlooks to three companies, and revised upward outlook to ?stable? from ?negative? for one company. At the end of December 2020, the outstanding bonds of these developers stood at around THB270 billion, accounting for around 63% of total interest-bearing debt. Around THB95.5 billion of bonds will come due within this year. ?

The value of the residential property sales in 2020 dropped for the second consecutive year. Demand for housing, especially condominiums, has declined sharply since 2019 after the Bank of Thailand (BOT) implemented new loan-to-value (LTV) rules. Demand from foreign buyers also declined due to the trade war and the appreciation of the Thai baht. The outbreak of COVID-19 in early 2020 further suppressed demand for condominiums. However, the landed property segment was less affected by the COVID-19 pandemic. According to data from the Agency for Real Estate Affairs (AREA), the value of new condominium projects launched in Bangkok and the vicinity in 2020 dropped sharply by 70% y-o-y while the sold value dropped by 54% y-o-y, causing the ending inventory to decline by 9.4% y-o-y. On the contrary, new launches of landed properties dropped by only 6% y-o-y while the sold value dropped by 12% y-o-y.

The 23-rated developers seemed to perform better than the industry average. According to data collected from rated developers, the total value of new launches dropped by 30% y-o-y, reflecting a 60% drop in new condominium project launches and only a 5% drop in landed property projects. Net presales (net of cancellation and bank rejections) dropped by 11% y-o-y as the growth in presales of landed properties of around 17% y-o-y compensated for the drop of around 45% y-o-y in condominium presales. The overall value of housing units transferred in 2020 (including both company-owned projects and joint venture projects) increased by 8%-10% y-o-y as several developers used aggressive pricing strategies to promote sales and transfers of completed units. The lower presales coupled with the rise in transfers caused the ending backlog of the 23 rated developers to fall by 30% y-o-y to around THB210 billion at the end of 2020.

TRIS Rating expects the residential property industry to gradually recover from its trough in mid-2020. Presales are expected to grow by 5%-10% from last year. Key positive factors are the record-low interest rates and the rollout of vaccination programs. On the other hand, the rising proportion of household debt to GDP and the expansion of NPLs continue to be the primary factors weighing down the industry. In addition, a prolonged of the COVID-19 pandemic coupled with the slow progress of vaccinations may cause the speed of recovery to fall below our target. Demand for condominiums may not change much from last year as investors and foreign buyers may not come back until the end of this year. Several developers have adjusted their product mixes by launching more landed property projects where demand remains resilient. The average selling price per unit may also drop since developers are focusing more on the middle- and low-price housing segments, which have the highest demand. However, there are some concerns over the relatively high bank rejection rates in these segments.

? The rollout of vaccination programs. According to the timeline released by the government, around one-third of the population of Thailand is expected to have received vaccinations by the end of 2021. The rollout of vaccines will help boost consumer confidence and the recovery of the domestic economy. In addition, demand from foreign buyers could return if the travel restrictions are lifted. However, there remains some uncertainty regarding the distribution of vaccines and the rate of vaccination.

? Record-low interest rates. The disruption of the world economy by the COVID-19 pandemic caused several central banks to cut their policy rates to the lowest level in the last decade. Last year, the BOT lowered the 1-day policy rate three times to 0.5% from 1.25% amid concerns over the negative impacts of the COVID-19 and the strength of the Thai baht against the US dollar. The central banks of several major countries also used quantitative easing measures in conjunction with near-zero policy rates to reduce the impacts on their economies. Due to the significant increase in the amount of government debt around the world, we do not expect interest rates to rise in the near term. The relatively low interest rates will benefit both property developers and homebuyers.

? Government supporting measures. The government has extended the reduction in the transfer fee and the mortgage registration fee to 0.01% until the end of 2021. This measure applies to the purchase of housing units priced less than THB3 million. We expect several rated developers to increase the proportion of housing units priced at less than THB3 million in their portfolios. Larger developers with strong positions in this segment will benefit from economies of scale and speed of construction. However, bank rejection rates in this segment are quite high.

? The second wave of COVID-19. The COVID-19 pandemic continues to play a prominent role this year. The second wave of the pandemic in late 2020 and early 2021 may hinder the recovery of the domestic economy. Several developers have delayed plans to launch new projects and have adopted a wait-and-see approach, as a prolonged pandemic is likely to exacerbate the unemployment rate and dampen the purchasing power of domestic buyers.

? NPLs remain high. The NPLs of commercial banks have kept rising, to 3.88% in September 2020 from 2.19% in 2014. The rise in NPLs has caused banks to tighten their lending conditions. Thus, despite considerable demand for housing in the middle- and low-priced segments, the ability of homebuyers to service their debts is still questionable given the current economic condition. According to data from the Real Estate Information Center (REIC), new mortgage lending dropped by 9% y-o-y in 2019 and 11% y-o-y in the first half of 2020. Since a relatively high bank rejection rate will directly impact the earnings and revenues of rated developers, developers will have to work closely with homebuyers to get loan approvals.

Currently, TRIS Rating assigns ratings for 23 residential property developers. Last year we assigned a rating to one issuer, affirmed the ratings and outlooks of 13 issuers, downgraded the ratings of five issuers, and revised the outlooks of four issuers. This year we expect a slight recovery in operating performance for most rated developers. We forecast a 5% growth in revenues and a more than 10% growth in EBITDA. Price reductions to promote sales may continue but not at the level seen in 2020. Thus, we expect EBITDA margins to improve by 1%-2% for this year while debt levels are likely to remain largely unchanged. The improving sales and profit margins should help reduce the debt to EBITDA ratio, to around 6-7 times in 2021 and 5-6 times in 2022 from around 7-8 times in 2020.

This year, the Thai bond market has returned to normalcy. Several developers have prepared liquidity in advance amid concerns over disruptions in the bond market. According to data collected from the 23 rated developers, at the end of December 2020 outstanding debt of rated issuers stood at THB400 billion, with long-term and short-term bonds accounting for around 68% of total debt. Total bonds due in 2021 amount to THB95.5 billion, comprising THB13.1 billion of short-term debentures and THB82.4 billion of the portion of long-term debentures due within 2021. At the beginning of this year, 16 out of the 23 developers had enough cash and available credit facilities (which can be drawn from banks without prior conditions) to redeem bonds over the next 12 months. However, most developers still have other unencumbered assets like land banks or debt-free residential units, which can be pledged as collateral for new loans, if needed. 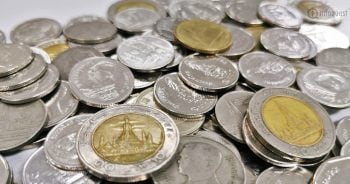