TRIS Rating affirms the company rating on Sansiri PLC (SIRI) and the ratings on SIRI?s existing senior unsecured debentures at ?BBB+?, with a ?stable? rating outlook. We also affirm the ratings on SIRI?s subordinated capital debentures (hybrid debentures) at ?BBB-?. At the same time, we assign the rating of ?BBB+? to SIRI?s proposed issue of up to THB7 billion in senior unsecured debentures due within 5 years. The new issue rating replaces the issue rating previously assigned on 29 August 2022, following SIRI?s request to increase the issue size to up to THB7 billion from up to THB6 billion. The proceeds from the new debentures will be used for SIRI?s debt repayment and working capital.

The ratings on SIRI and its debentures reflect the company?s diverse product portfolio, its strong market position in both landed property and condominium segments, and its high level of financial leverage. The ratings also reflect our concerns over the relatively high household debt level and the rising inflation which could impact the purchasing power of homebuyers in the short to medium term.

For the first six months of 2022, SIRI?s net presales was THB13.3 billion, compared with THB14.0 billion presale amount during the same period last year. The company reported total operating revenue of THB12.9 billion during the first six months of 2022, a 13% year-on-year (y-o-y) drop from the same period last year due mainly to a slowdown in condominium sales. SIRI?s backlog stood at THB16.9 billion, comprising THB15.6 billion in backlog of its own projects and THB1.3 billion in backlog under joint ventures (JVs). We expect SIRI to deliver backlog worth THB9.5 billion in 2022, THB5.0 billion in 2023, and the rest in 2024. We view that SIRI?s operation and earnings for the remainder of 2022 can be affected by a challenging operating environment. However, SIRI?s operating results should be in accordance with our expectation.

Our base-case scenario expects SIRI?s total operating revenue to be around THB32-THB35 billion per annum during 2022-2024. We expect revenue from residential property sales to remain the key contributor, accounting for around 90% of SIRI?s total operating revenue over the forecast period. We project SIRI?s earnings before interest, taxes, depreciation, and amortization (EBITDA) to range from THB7.0-THB7.5 billion annually and EBITDA margin to stay around 22% in 2022-2024. For the first six months of 2022, the company?s EBITDA was THB3.3 billion, and its EBITDA margin was around 25%.

We expect SIRI?s financial leverage to remain high over the forecast period. Our base-case forecast expects SIRI?s debt to capitalization ratio (including proportionated debts from joint ventures) to stay around 63%-65% and its funds from operations (FFO) to total debt ratio to stay in the 5%-10% range during 2022-2024. As of June 2022, SIRI?s total consolidated debt was THB73.1 billion. SIRI?s priority debt, including total consolidated secured debts and unsecured debts at its subsidiaries, was THB18.4 billion. These translate to a priority debt to total consolidated debt ratio of 25%.

and dividend payout ratio of around 50%. SIRI?s sources of funds consisted of THB3.2 billion in cash and THB10.7 billion of undrawn unconditional committed credit facilities from banks. FFO is forecast to be THB3.8 billion in 2022. In addition, SIRI had unencumbered land and developing projects at book value of THB35.7 billion and remaining finished units in its own debt-free projects with selling prices of THB1.0 billion, which can be pledged as collaterals for additional liquidity if needed.

The ?stable? outlook reflects our expectation that SIRI will be able to deliver its operating performance and sustain its financial profile as targeted. We expect SIRI will keep its debt to capitalization ratio below 66% and its FFO to total debt ratio in the 5%-10% range over the forecast period. We also anticipate SIRI will retain its pretax return on permanent capital ratio (ROPC) ratio above 5%.

The ratings and/or outlook could be revised downward should SIRI?s operating results and/or financial position significantly deteriorate from our expectation. On the contrary, an upward revision would materialize if SIRI?s financial profile improves to the levels attained by its higher-rated peers, such that the debt to capitalization ratio stays below 55% and the FFO to total debt ratio soars to 10%-15% on a sustained basis. 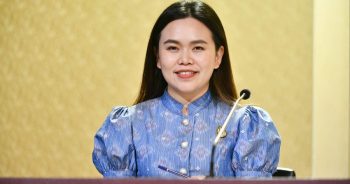