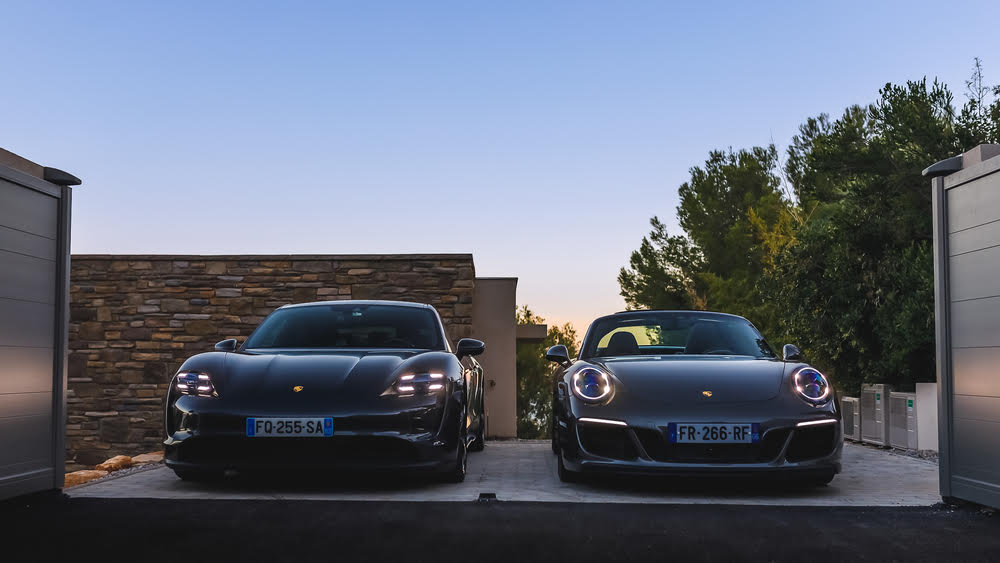 On 7 November, the 100,000th Taycan rolled off the production line. The milestone car left the assembly line about three years after production first started at the main plant in Zuffenhausen in September 2019. The Neptune Blue Taycan Turbo S is destined for a customer in the United Kingdom. "We are very pleased to have reached this milestone in production history so quickly - despite the recent challenges posed by the semiconductor shortage and the volatile Covid situation," says Kevin Giek, Vice President Model Line Taycan. "With the Taycan, we have made a decidedly successful start in the electric age."

The top three individual markets for the all-electric sports car are currently the US and China and the UK/Republic of Ireland. The model is now available in three body styles - the Taycan sports sedan, Taycan Cross Turismo and Taycan Sport Turismo. In each case, up to five engine options are coupled with rear- or all-wheel drive. Its range of 513 kilometres (WLTP) makes the Taycan 4S the version with the longest range. The Taycan Turbo S is the current holder of the fastest production electric car record, with a time of 7 minutes 33 seconds round the Nuerburgring Nordschleife.

Design and technology fan: Jean-Hubert Revolon and his Taycan 4S
It is not only in production that the Taycan has quickly reached the 100,000 mark. It's a magic number in terms of mileage, too, with many customers having already covered far more than 100,000 kilometres in the electric sports car. Jean-Hubert Revolon has already driven more than 188,119 kilometres in his Taycan 4S since mid-August 2020. The transport entrepreneur lives in the Lyon area and has already driven his Porsche in almost all of France's neighbouring countries, covering daily distances of up to 1,200 km.

His reasons for buying the car were its design and "the technical innovations, which are good for the environment as well as my budget because of the low running costs," he says. Other strengths, in his opinion, are the car's performance and suspension, which offer "fiendishly good grip and maximum agility, something only the wizards at Porsche can manage." Moreover, the 43-year-old says none of his many cars have ever been as reliable as his Taycan 4S. Only one suspension sensor has needed to be replaced so far.

But not everything has always gone so smoothly. Revolon recalls a curious charging experience when he was standing with his Taycan just a few metres from a charging station, but couldn't reach it because of a barrier. The facility was part of a rest area on the highway and wasn't accessible from the town, as his navigation system had incorrectly indicated.

The pharmacist from Marseille acquired the Volcano Grey sports sedan on a whim in June 2020. "Porsche Toulon had just taken delivery of a Taycan. After a test drive, I immediately decided on this model," he smiles. On business, he drives the Taycan 4S mainly in the south of France. "The longest drive was from Marseille to Megeve in the Savoy Alps. The 440-kilometre journey was uphill all the way, which of course increases power consumption. So I stopped off at Porsche Grenoble and charged my Taycan free of charge," recalls the 41-year-old. Apart from a noisy fan wheel, which was replaced under warranty, he's had no problems all this time.

"It's just fun to drive the Taycan," says Takvorian. In addition to the instant power delivery, he considers the looks to be among the car's strengths: "In terms of design, the Taycan is all- Porsche and has many details that are characteristic of the brand. Added to that are modernity and the solid build quality." As a frequent driver, the Frenchman also appreciates the agreeable noise level of the electric powertrain. "I love the sound of my 911 Targa, but over a long distance, the silence in the Taycan is very pleasant." His Porsche is always charged overnight using his home wallbox, with Takvorian only relying on fast charging stations when necessary.

Frequent business trips in Eastern Europe: Markus Kreutel and his Taycan Turbo
Markus Kreutel, on the other hand, mainly uses fast charging stations to top up his battery - and no wonder, given daily distances of up to 1,500 km. Between February 2021 and August 2022, the Porsche employee covered exactly 134,911 km in his company car, a Taycan Turbo. Kreutel is the Head of Body Planning at Porsche and is therefore responsible for the body in white production in Zuffenhausen, Leipzig and Bratislava. And as the CEO of Porsche Toolmaking, he also looks after that division's sites in Schwarzenberg, Dubnica and Horna Streda. As a result, he frequently travels from Porsche's headquarters in Zuffenhausen to Slovakia or the Ore Mountains.

In addition to its long-distance capabilities, secure roadholding even in bad weather, and precise handling, Kreutel praises the lower running costs compared to a combustion-engined model. And he's a fan of the build quality and durability, too: the white Taycan has withstood the rigours well, even after more than 100,000 km. Both visually and technically: "The battery still had 91 per cent of its original capacity," says Kreutel. And again, the only problem has been a minor one, when the plastic cover on the tailgate lock came off.

The charging infrastructure, on the other hand, sometimes tested Kreutel's patience. "One trip in Romania has stuck in my memory," he says. "The first charging station in Timisoara, which I pulled into at 2am, unfortunately didn't work. The next station in Arad was on an unlit side street." So expanding the fast-charging system is at the top of the frequent driver's wish list.

The end and the beginning: endurance tests at 'Auto Bild' and 'auto motor und sport'
As well as customers and Porsche employees, automotive journalists are, naturally, among the regular drivers of the Taycan. A Frozen Blue Taycan 4S completed 100,000 km in accelerated durability testing with the German car magazine 'Auto Bild'. Starting on 17 October, 2020, the demanding endurance test ended in November 2022. "For me, our endurance test of the Taycan proved at least three things. First, this car attracts attention like few others," says Tom Drechsler, Editor-in-Chief of 'Auto Bild and Auto' at the Bild Group. "Second, an electric Porsche has to be a Porsche from the very first moment, and that's what the Taycan is. Third, our test proves that long-distance driving is absolutely possible with electric power."

'auto motor und sport', meanwhile, has got its hands on a Taycan Cross Turismo 4: a Mamba Green model recently joined the editorial team's endurance test fleet. Over the course of about two years, the odometer will reach six figures for them, too. It's the very first time that the Motor Presse Stuttgart media group will cover the full endurance test distance of 100,000 km in an electric car. "Having a Porsche in the endurance test fleet is something special, of course. After various short tests over a maximum of 12 months, but more usually only three to six months, it is now time to complete the 100,000-kilometre distance within a maximum of two years with electric vehicles," says Michael Pfeiffer, editor-in-chief of 'auto motor und sport'.

"We're now confident that we can also ensure very close documentation of charging processes and consumption with electric vehicles that meets our quality standards. This is essential in order to be able to make a qualified statement about the everyday quality of the vehicle. We are also naturally curious to see how the Cross Turismo performs as a daily companion," adds Jens Dralle, head of testing and technology at the title.

Smart, green and lean: production
Not only the Taycan itself, but also its state-of-the-art production methods set standards in the areas of sustainability and digitalisation. A high-tech production facility, featuring new technology and processes, has been built in Stuttgart-Zuffenhausen. Artificial intelligence (AI) is used in the production of the electric powertrains, for example. Thanks to 'machine learning', for instance, camera systems assess quality even more precisely than conventional non-AI monitoring systems when stamping the drive number and pre-assembling the gearbox. This also reduces the workload of production staff, as they have to do less follow-up checking. One example from the area of resource-conserving processes and technology is the recuperation of energy from robots. As with the Taycan, kinetic energy is converted into electrical energy during braking processes and is stored with the help of a high-performance capacitor. If the robot accelerates, the recuperated energy is put to use.

"The Taycan is an innovator and so is the Taycan's production," says Albrecht Reimold, Member of the Executive Board for Production and Logistics at Porsche. "Since the start of production in 2019, we have been manufacturing the Taycan in a completely carbon-neutral manner. This now applies to the production of all sports cars at our plants in Zuffenhausen and Leipzig. This brings us another step closer to our vision of a 'zero impact factory'. Smart, green and lean - that's our understanding of sustainable production."